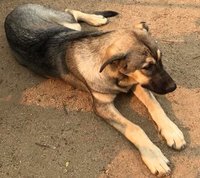 No mask. not black. kind of reddish brown.

11-17-21 Needle will be for sale AFTER her first litter of pups. too small. Not dire wolf standards.

12/12/2021 Needle is more hyper than the other pups in her litter because she is lighter in weight. Large boned dogs are slower than light boned dogs. That's nature. She will be able to go on jogs and to do some activities.

Needle has grown as large as her siblings and weighs in at about 90 lbs. She is as tall as a large German Shepherd dog. This has surprised me.

*She will be used for the Fox Project, spayed and then adopted after this.*

Needle was chosen for the FOX project as she was the lightest and smallest pup in this litter. Needle was the outgoing pup that loved everyone.

Very inquisitive and intelligent. As all pups/dogs that are untrained, she found ways to satisfy her own needs and to do things that SHE wanted to do. Did not like authority from others. Liked treats so she did things for rewards.

Needle was bred with Laddie boy and Pepper In her second season.

As Needle was part of a pack of Dire Wolf Dogs here at the Schwarz Kennels, she had come into her first season right behind her sister Napkin during their first heat cycle. Napkin being the first in the pack into full heat became the head monarch and claimed the male studs attention and would not allow Needle to breed.

Needle was kept at the Schwarz Kennels because of the Vulpes Fox Project starting up and Needle was the runt of her litter and would begin the process of downsizing the great Schwarz Dire Wolves into the up and coming Vulpes Fox Project. Needle has all the genes of all her sisters, brothers, mothers and fathers of the Dire Wolf Project and the 32 years of my hand selective breeding for Health, Temperament and the Extinct Look of the prehistoric canines. Needle could go both ways as in the many dinosaurs before her that split off the branches of one path and into the many.

When Needle came into season, Laddie boy was her constant companion and perhaps the Stud of the litter to come to begin the Fox Project. Laddie boy was not a 'proven' sire and had no offspring as he was only 10 months old at that time. I left him with Needle until the time that i felt Needle was about to stop accepting males and I had seen no tie or mating between the two of them. I then placed the ''proven'' stud Pepper (out of Stella x Winston) in with Needle to be sure that we did not waste the opportunity to have Needle pups. Giving Needle a live litter of pups accomplishes three things.

1.) It matures the bitch and calms them down.

2.) It gives the female experience of life itself and continues the training and molding of a female dog.

3.) Perhaps giving Schwarz Kennels another Dire Wolf to keep the lines going or perhaps that pup might become another prospective companion for a family in need.

No matter who the sire of the next litter is, Needle will grow in many ways and become the best she can be, full-filling her role in nature and life and allowing us to assess her and her new pups into the next generation.

On July 15th and 16th Needle had her puppies in the walk in closet of the home of Lois Schwarz in White City Oregon. Lois observed and reported all the pups born and the attitude of mom and newborn pups as she has been doing for over 60 years. She could allow for a 'natural' birth without the coddling of the weak therefore guaranteeing another generation of StrongBred dogs.

Laddie Boy Pups: If there were any laddie boy pups, the results would be varying as he is not a 'proven' stud. With proven studs one has an example of the offspring and the health and attitude of that stud dogs prodigy. We had no clue what laddie boy would give us because he had never had any pups before.

Pepper Pups: We know that Pepper begets pups with girth and size as well as the correct coats that are not too soft yet not too harsh. We can assume that all Peppers pups will have thick necks, large feet and medium coats that start out black and end up silver sables of a variety of shades. 9 out of 10 of his pups have strong erect ears and great health as Pepper is 2 generations out of the English Mastiff lines, yet he takes on the Dam's side of the pedigree (Stella) and her long branches of American Alsatians going all the way back to 1987. Some great pups might just pop up out of our l