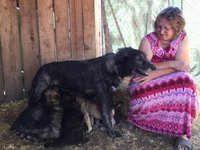 THE DIRE WOLF IS NOT A WOLF

The dire wolfs DNA is more in line with the Hyena and the Jackal and is not a Wolf at all. As I have written back when the project first began in 1986 before the first breeding of the Malamute x Shepherds or (Shepalute's), the dire wolf or Buffalo wolf that I would be creating was more of a dinosaur and should not look like a German Shepherd nor any other breed of dog in existence today.

In studying canines for over 60 years, I knew that this Dire Wolf was a scavenger and that Man followed all animals over the earth, coming and going and Man studied them, for Man had the brains and curiosity to use all he saw around him to his advantage. Homo Sapiens also used their memories to add 2 and 2 together. We are the only animals to have reason and to think logically. We are the only animals to write and combine rules and laws to govern ourselves with to try to come to logical and 'good' outcomes for the tribe. Man is an animal that has evolved from dinosaurs as well.

When I use the term 'dinosaurs' I am speaking of evolution as we have also evolved. Nothing is like it was before each living thing EVOLVED.

So, as I began this 'project' (what ever the name would be) I brought out a fresh canvas and bred together the Alaskan Malamute and the American German Shepherd dog to start it off. Why these two breeds? If you study the Alaskan Malamute and how this breed club's rules keep the bone structure solid, you would know that in order to 'correct' all the issues with the GSD's poorly put together body mass, one would need to improve that in its infancy just to beget a really nice strong healthy shape to the prodigy.

We needed solid bones, not oval weak bones. So in this first breeding of the intelligence, dedication and will of the working GSD to the solid healthy bones of the Malamute we had our first litters.

For over 6 years I bred these two breeds together and hand selected brains and brawn while selling pups that did not have what was needed in the pups I would use going forward.

When choosing the most important pups, I made sure that no pup had any deformity or weakness by allowing 'Gods Breeding Plan' (TM) to cull the litters. Mother dogs (Bitches) would separate the weak from the strong and weak pups would pass on early in their development. In the wild this is exactly what occurs. I used to wonder, how do animals knew what to do? They do not read books written by the most educated people, they just follow their inner (instincts) guts, so to speak. Birthing is NATURAL and pushing pups away that have issues is also natural for a mother dog but very hard for a human being to watch and to accept. Of course we humans want every pup to survive.

So this then is how the American Alsatian breed began, with the Malamute Shepherd or 'Shepalute'